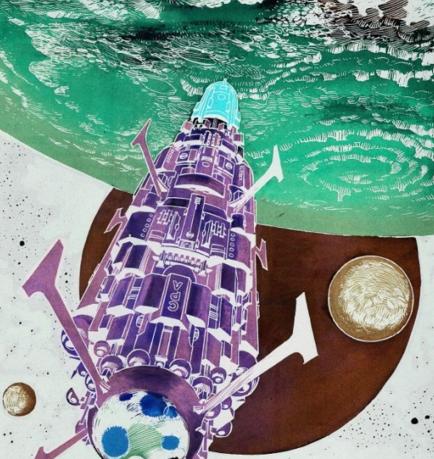 Please note all the Synopsises (from France and other countries) are supposed to be uploaded in our Twinspace (called FORUM NATURE+CULTURE). Only two samples are published here (on NOAH website)...

THE SPACE The earth is devastated by the madness of men. They looted all possible natural resources and continued to exploit and consume as if nothing had happened. The air became unbreathable because of the high pollution, the species disappearing from minute to minute, and the decrease of oxygen due to deforestation now make the land uninhabitable.

Time was now counted. That's why the politicians of the biggest powers came together to make a decision: to select an elite minority to colonize an exo-planet of our system named Colony. Each country has the right to select a certain number of people according to their population.

Thus, young people are trained to have sufficient skills in science, biology, culture, and all the skills required to repopulate a planet. Flo 1 and Sol 9 are part of this young team destined to leave on Colony. However they have different ideas about this project: Flo 1 wants to leave, but do not think that the travelers will survive until the arrival on the exo planet, and even if some arrive alive, they will not survive long time.

He wants to take control of the station named The Arck and bring it into orbit around Jupiter. So he created a team that shares the same ideals as him to put his plan into action.
Sol 9, meanwhile, thinks it's useless to leave as cowards on another planet or even to orbit around another, she wants to save her planet and so stay.

So Sol 9 will propose to go and discover the land and what it has become since all humans live in concrete structures and only scientists have access to outside for analysis. Sol 9 will break the rules and take Flo 1 in spite of himself, outside.

It will realize that governments are lying because they continue to exploit natural resources despite their promises. She sees trawlers, fishing boats and all that in the middle of the garbage. In this macabre landscape, there is no tree, no natural space around; no corner of greenery.
They get caught by security, and Sol 9 succeeds in persuading the police that she forced Flo 1 to come with her, so it's not her fault. He is released.

The launch of the ship is the next day. Flo 1 managed to gather worshipers and expose his plan in detail to the crowd.
Sol 9 no longer has the right to leave because of the fact that she is imprisoned, she must also be executed because she discovered the secrets of the states. She also discovers that only one pair of each protected animal species remains, housed in a building reserve. The animals must also leave with the other people chosen to populate the exo planet.

Only if Flo 1 wants to take control of the ship to put it into orbit will the animals die because of their inability to this new environment.
In addition, Sol 9 wants to save the planet by including the fact that nature must regain its rights. She wants to stop the animals from leaving. She develops a plan to escape the prison and send a message to Flo 1 for help before the ship leaves.

She will manage to escape and by the way she will see the map of the remaining natural areas. She sees a green space remaining, next to the building accessible in a few hours. She succeeds in joining Flo1. A heated debate ensues. She convinces him to help him.
Thus they will take control of the building with allies in agreement with their ideals.

In the end, the inhabitants have the choice: either go to the exo planet or stay to "die" according to the leaders since they remain on their positions. Flo1 is in a dilemma. He decides to leave anyway because he wants to discover the space and its possibilities. He promises to return to Sol 9 if the exo planet is really habitable and if they manage to recreate a civilization. But she knows it's wrong. A heart-rending goodbye follows.