the "C5 on line" exchange / ERASMUS MOB I

Six videoconferences and TCA (for transnational cooperative activities) were prepared by the partner schools then made between the 14th of december and the 18th of december after the C5 study travel (to France) was definitively cancelled, due to COVID19.

C5 PROVISIONAL AGENDA "in face": SHOOTING OF THE SCIENCE-FICTION FILM, FINAL PRODUCTION OF THE PARTNERSHIP.

DEFINITIVE AND AMENDED AGENDA (remote cooperation): The study travel has been replaced by a virtual exchange, which concretely took the form of workshops prepared in advance by the partners, materialized by six videoconferences consisting of as many activities implemented locally as part of a week of mobilization in favor of the European and international action of the French High School known as ERASMUS MOB. The objective of C5 "on line" was twofold.

1 °) achieve the initial objectives defined by the E + A project, despite the pandemic. Thanks to the shooting carried out in June by the French high school students, on the basis of the scenario written during the C4 exchange, the partners had a sketch of the transnational film to be produced collectively, viewed in France on June 24, then in Alcochete on October 12, presented in our classes at the start of the school year this fall. A video workshop was set up in accordance with the decisions recently validated by the R4 meeting to organize consultation between the students of the four schools in order to ensure the transnational character of the film supposed to reinterpret the myth of Noah. The pupils decided how to complete the sketch by adding images and sounds offered by the different schools, the actual editing of the "master" version being ensured after the exchange.

2 °) show the solidarity of all schools in a context of crisis which has prevented some of them from carrying out their mobility plan, find alternative solutions to the learning sessions planned as part of the short exchange -term C5 thanks to remote and thus innovative cooperation, reassure the school community about the sustainability of Erasmus + projects and ensure over time the maintenance of contacts with the schools of the ending E + A project.

It was also a question of completing our process of validating the formal and non-formal knowledge of the exchanges undertaken within the framework of the partnership, by allowing our students to express themselves, to compare their points of view and to assume their stimulating citizenship. their appetite for the process of internationalization of teaching.
"Behind the scenes" and the "making off" of the C5 virtual study travel are presented in NBE+  and the results were disseminated to the public.

"Fabulous"  / 2 presentations for a lecture by ECLA team

DAY 1 / Monday, December 14 (two hours). A EUROPE and DEMOCRACY (W1) workshop co-animated by our students from the specialties of Première HGGSP and HLP and by the Dobrich team allowed a very dense debate on social issues and demonstrated the existence of common areas of interest like the pluralism of opinions in the community of destiny that the EU represents. 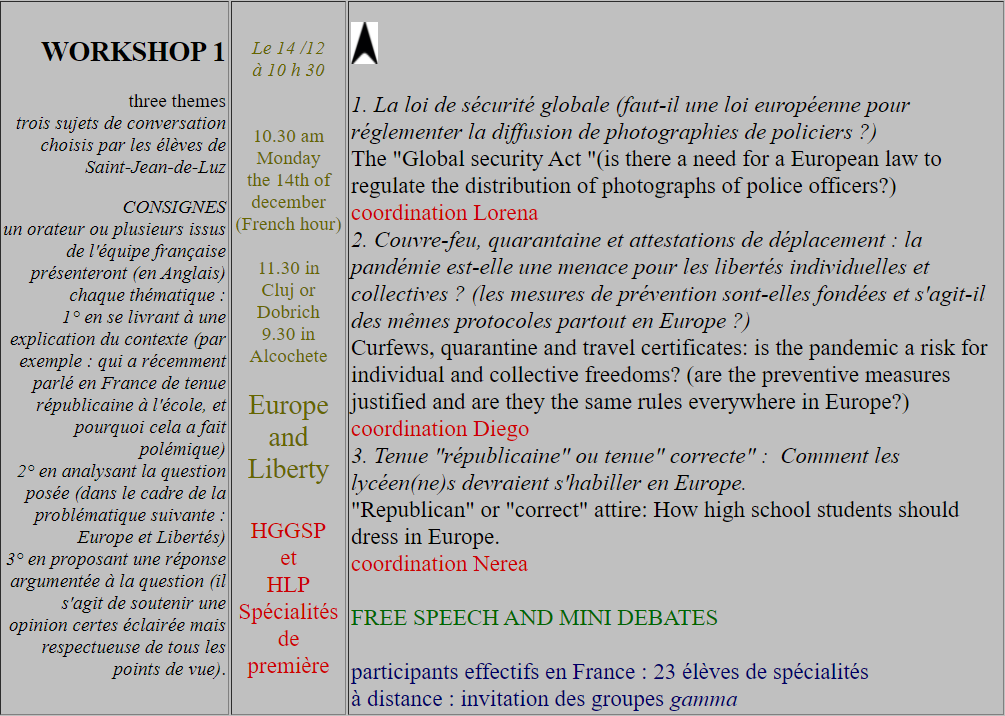 some explanations by Dobrich team

TO BE FOLLOWED: SLIDES AND VIDEOS

DAYS 2 and 3 / Tuesday December 15 and Wednesday December 16 (two hours) Two workshops (W2 and W3) dedicated to EUROPEAN LAW,  led by our final year ("Terminales") students as part of the EMC (moral and civic education) and illustrated by presentations from Bulgaria , Portugal and Roumanla. The activity consisted of a role-playing game simulating the work between the European summit and the commission, leading to discussions on animal rights, the protection of living organisms and sustainable development, and leading to an online vote on on the proposals discussed.

and PRESENTATIONS FROM ALCOCHETE, DOBRICH AND CLUJ about some animals in distress and natural topics (to be shown after the role plays on Tuesday)

DAY 5 / Friday December 18 (one hour and a half) The final workshop (W6) led by the class of Seconde 6, hard core of the local target group, saw the students of the Lycée Ravel present the climate and the fauna of the French regions and the partners report on the natural environments that exist in their own region, the entire virtual group discussing existing protection measures or that should be taken according to them.

THE ARK MOVIE MAKING, THE END. And a conversation...

DAY 4 / Thursday, December 17 (three hours) The POSTPRODUCTION and CONVERSATION workshop (W4) decided on the modifications to be made to transform the film to serve as the final production of the project. It was co-hosted by our students from Première OIB (a small group in which two students played extras during the shooting of the sketch in June) and a high school student from Cluj-Napoca, who had been in charge of putting together wrote the scenario finally developed during the C4 exchange and was able to explain "from the inside" the approach pursued to French students (the target group students of the E + A project having left Ravel high school in June).
A CONFERENCES and EXCHANGE workshop (W5) led by second year students following the Latin-Greek course (ECLA) consisted of the presentation of the animal condition in Antiquity and the conceptions of the ancients in this area (Pythagoras) and a led to a discussion showing the permanence of myths linked to animals, real or fabulous, and to hybrids.